BiCOM Inc and Team participates in a local health screening event with free glaucoma screenings. It is imperative to get regular eye pressure (IOP) screenings from your eye doctor. Vision loss caused by Glaucoma can be slowed or halted with the proper medication. Getting an eye pressure screening has never been easier or safer with painless through the eyelid Tonometer Diaton.  Many in need were screened and some at risk were referred to an ophthalmologists for further evaluation.

We thank organizers and our helpers for making this event a success! By diaton News
BiCOM Inc presents it's unique and innovative products at MEDICA 2014, World Forum for Medicine in Düsseldorf, Germany.  Unique Diaton tonometer(http://www.TonometerDiaton.com) worlds only through the eyelid tonometry test for glaucoma testing and revolutionary Magnetic Therapy DIATON
BiCOM's efforts to stand at the forefront of innovation has been recognized by numerous awards and Gold medals. 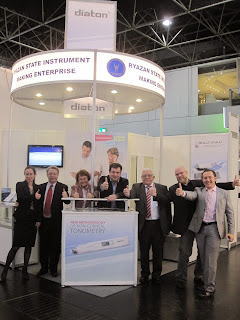 BiCOM Inc with Optimetrics Inc are proud to feature transpalpebral and transscleral Diaton tonometer at The Inter-American Course which is designed for practicing ophthalmologists in Latin America and the Caribbean, to provide maximum emphasis on practical approaches to select clinical problems. Diaton solves intraocular pressure (IOP) accuracy in cases where corneal tonometers are not applicable, such as corneal pathologies, variability in CCT or corneal surgeries and corneal implants.

BiCOM Inc to feature transpalpebral Diaton tonometer at the American Academy of Ophthalmology, AAO 2014. Transpalpebral Diaton tonometer is the world's only non-corneal and non-contact tonometer used through the eyelid to quickly and painlessly determine intraocular pressure without directly touching the cornea or requiring use of topical anesthesia. Diaton tonometer is particularly useful in cases where standard direct applanation (corneal) tonometry is difficult or not viable, such as with pediatric patients, in presence of certain corneal pathology, edema, infection, following corneal surgery, KPro and in cases of eye trauma. Diaton tonometry demo and training sessions available at Exhibit #526

Diaton through the Eyelid Tonometer Pen is proud to be featured at American College of Emergency Physicians ACEP 2014 Scientific Assembly by BiCOM Inc.  Diaton is the only tonometer to allow measurements of intraocular pressure IOP through upper eyelid and sclera without numbing drops or effect of the cornea, without touching the eyeball.  Diaton tonometer pen is a trusted choice for Emergency Room (ER) or Emergency Departments (ED)

Authors: Lei Liu, Jing Li, Xin-Yu Li, Yu-Long Wang, Man Xu Refractive Surgery Center, Tongji Hospital, Tongji Medical College of Huazhong University of Science and Technology, Wuhan 430030, Hubei Province, China
AIM: To evaluate the performance of Diaton tonometer (DT) before and after laser in situ keratomileusis (LASIK) by comparing it with non-contact tonometer (NCT). METHODS: NCT and DT were used to measure the intraocular pressure before and 1 month after LASIK, the results were analyzed with SPSS 13.0. RESULTS: One month postoperatively, NCT readings declined by 5.76±2.31mmHg, DT readings did not differ significantly(t=0.70,P=0.487); the difference between NCT and DT readings had positive correlation with declined corneal thickness, and had negative correlation with the central corneal thickness postoperatively. CONCLUSION: DT readings were not affected by corneal thickness; therefore, Diaton tonometer may be a better choice for the measurement of intraocular pressure after LASIK.

BiCOM Inc., Team presented Diaton tonometer and provided free glaucoma screening at Health and Wellness Expo event on Staten Island.  The 5th annual Staten Island Economic Development Corporation (SIEDC) Health and Wellness Expo is free and open to the public. Presented by NYC Councilman James Oddo, Staten Island University Hospital and the SI Heart Institute the daylong conference will include informative keynote addresses, purposeful seminars, medical screening tests and fitness demonstrations.
The aim of the SIEDC expo is to equip Staten Island residents with knowledge about their health and all the health services available to them throughout the borough. Attendees will receive unlimited access to healthcare professionals.

1000's of Optometrists at the International Vision Expo West, #VEW have an opportunity to see and try first hand the worlds only through the eyelid and trans-scleral tonometer which allows to obtain IOP independent of the corneal biomechanics.  Tonometer DIATON is an ultimate solution for children and adults, even patients wearing contact lenses can get accurately screened.  Diaton tonometer pen is handheld, non-contact (no contact with cornea), latex-free (no tips or covers), painless tonometer.

DIATON tonometer, aka Glaucoma Eye Test, the world's only through the Eyelid, non-corneal tonometer available to general, primary and family physicians to quickly and painlessly screen for glaucoma in an in-office setting without directly touching the eyeball or using the numbing drops, is presented at Pri-Med East in Boston by BiCOM Inc.

Remember those difficult patients where you simply can NOT get an accurate Corneal/Applanation IOP…? 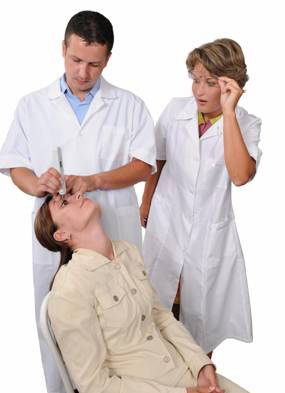 Through the eyelid tonometer Diaton was featured at the Optometry's Meeting, AOA in Philadelphia. Diaton allows quick and painless measurements of intraocular pressure IOP independent of corneal properties. Diaton was very well received at the meeting with many Optometry School professors looking forward of adding this irreplaceable  tonometer to the OD curriculum. Tonometer Diaton (BiCOM Inc) presented by FarbaC Biomedical S.A. de C.V at XXXI Congress of Ophthalmology held in Cancun, Mexico. Tonometer Diaton allows to measure intraocular pressure through upper eyelid and sclera without use of the drops or contact with the cornea.

Diaton tonometer presented at AAPA Annual Physician Assistant Conference to over 6000 PA's.  Diaton allows to quickly and painlessly measure intraocular pressure in children and adults. Visit BiCOM Inc exhibit for an in person demo and training.

Purpose: To evaluate agreement among Goldmann, Tonopen and Diaton transpalpebral tonometers in keratoconus.

Conclusions: The measures of Diaton transpalpebral tonometer shows satisfactory reproducibility and their concordance with the Goldmann, mainly in the patients with karatoconus on which the pressure values were higher than the Goldmann, may trend to a measure value closer to the real intraocular pressure, as Goldmann tonometer underestimates the intraocular pressures on patients with keratoconus.

Transpalpebral Diaton Tonometer to be Featured at ARVO 2014, The Association for Research in Vision and Ophthalmology, Orlando FL

BiCOM Inc is proud to present Translapebral Tonometer Diaton to over 11,000 visitors of ARVO the largest and most respected eye and vision research organization in the world http://www.arvo.org .  Diatons unique through the eyelid and sclera abilities open up new opportunities for vision researchers to quicker find cure for glaucoma, a leading cause of blindness worldwide.

Escalon Medical Corp. (Nasdaq: ESMC) today announced that it has entered into a distribution agreement with Long Beach, NY based BiCOM Inc., to distribute its transpalpebral "Diaton" tonometer. The Diaton tonometer will be featured alongside the Company's new VuPad™ ultrasound system at the Annual Symposium and Congress of the American Society of Cataract and Refractive Surgery (ASCRS) in Boston, April 25-29 (booth 873).

Glaucoma is a leading cause of preventable blindness.  BiCOM Inc. with its Non-Corneal and Through-the-Eyelid DIATON Tonometer is challenging the “Sneak Thief of Sight” through awareness and screening events.  BiCOM is advising and guiding all of its distributors located in over 60 countries in North and South America, Europe, Asia and Middle East to participate in the World Glaucoma Week on March 9th-15th through Screening and Awareness campaigns.

Tonometer Diaton featured at SECO 2014, Atlanta by BiCOM Inc., and Vision Systems (VSI) at Booth # 1029. The new wave of Diaton tonometry is on the forefront of Glaucoma prevention and detection, with unique non-corneal, through the eyelid measurements, without need of eye drops or replacement tips. Daton tonometer is simple to use and ideal for children and adults. The SECO conference takes place at the Georgia World Congress Center in Georgia – visit for demonstration and free training.

Tonometer Diaton (BiCOM Inc) presented by FarbaC Biomedical S.A. de C.V at Cursos de Actualización en Oftalmología held in Mexico. Tonometer Diaton allows to measure intraocular pressure (IOP) through upper eyelid and sclera without use of the drops or contact with the cornea.

"Transpalpebral tonometry requires no contact with the cornea, therefore, strialization of the device and anesthetic drops are not required and there is very little risk of infection. Transpalpebral tonometry is used in those for whom Goldmann tonometry is not indicated, such as children, those with corneal pathology, or those who have had corneal surgery. Diaton tonometer is suggested for wide range of applications: at patient's bedside, in geriatric homes, in children hospitals, for the military and home use."

TONOMETER DIATON Featured in a HOT LIST of Business-Boosting Products in INVISION MAGAZINE:

No-Touch Glaucoma Test The Diaton tonometer – aka Glaucoma Eye Test by BiCOM Inc., offers an option for quickly and painlessly screening for glaucoma without directly touching the eye or using the drops. The pen-like device measures Intraocular Pressure (IOP) through the patient’s eyelid, with no contact to the cornea needed.  The portable tonometer can be used in a variety of settings, such as clinics, hospitals and nursing homes. On Page 26 http://mydigimag.rrd.com/publication/?i=191231

Diaton tonometer is proud to be presented at Pinellas County Osteopathic Medical Society.  Diaton is the only tonometer to allow measurements of intraocular pressure IOP, test for glaucoma through upper eyelid and sclera without effect or touching the eye. Diaton tonometer plays a major role in glaucoma detection in over 60 countries.

By diaton News
BiCOM Inc presents it's unique and innovative products at MEDICA, World Forum for Medicine in Düsseldorf, Germany.  Unique Diaton tonometer(http://www.TonometerDiaton.com) and revolutionary Magnetic Therapy DIATON (http://www.MagneticTherapyDiaton.com)
BiCOM's efforts to stand at the forefront of innovation has been recognized by numerous awards and Gold medals.
Visit us at Expo Stand A12 in Hall No.10